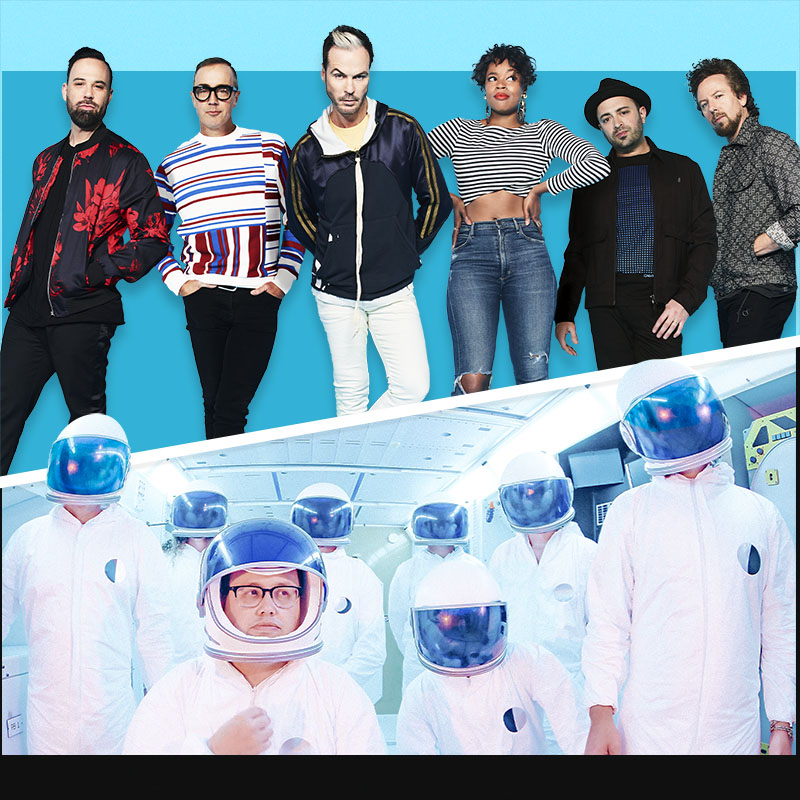 Fitz and The Tantrums
"Sway"

Fitz and The Tantrums and
St. Paul & The Broken Bones

Fitz and The Tantrums

With their blazing horns, electric synths, and funky soul-pop, Fitz and The Tantrums are determined to get you to move—even (or especially) when life’s beating you down. “We like to bring the dance party,” frontman Michael “Fitz” Fitzpatrick claims. That mantra has steered the Los Angeles sextet through every turn of their career since they formed in 2009 with a college friend, saxophonist/flautist James King, who then helped bring on co-singer Noelle Scaggs, drummer John Wicks, bassist Ethan Phillips (later replaced by Joseph Karnes), and keyboardist Jeremy Ruzumna.

The instant chemistry continued thanks to a mutual love for ‘60s Motown, ‘70s funk, and ‘80s New Wave—not to mention that sizzling vocal interplay—which translated into a rollicking live show and the throbbing neo-soul of the Tantrums’ 2010 debut, Pickin’ Up the Pieces. Indie audiences may have grabbed onto their infectious bops first, but Fitz and co. were soon climbing pop charts around the world with 2016’s “HandClap,” a dizzying, bass-driven anthem utterly uninhibited in its feel-good indulgence. That lust for life powers the group’s charm whether they’re addressing personal neuroses or political pain in their lyrics—as on 2019’s All the Feels. Through it all, they serve up heart-pumping pop celebrations to answer the question Fitz said he continues to ask himself: “How do we talk about anxiety, stress—depression even—and still make it a song that you want to dance to?”

A fever dream in sonic form, St. Paul & The Broken Bones’ new album The Alien Coast represents the most adventurous and original output yet from an ever-evolving musical powerhouse. In a profound shift for the Alabama-bred eight-piece—Paul Janeway (vocals), Jesse Phillips (bass), Browan Lollar (guitar), Kevin Leon (drums), Al Gamble (keyboards), Allen Branstetter (trumpet), Chad Fisher (trombone), and Amari Ansari (saxophone)—the band’s fourth full-length and first for ATO Records strays far from the time-bending soul of past work like their 2014 debut, arriving at a convergence of soul and psychedelia, stoner metal and funk. At turns explosive, elegant, and unhinged, that sound makes for a majestic backdrop to St. Paul & The Broken Bones’ visceral exploration of the strangest dimensions of the human psyche.

There is deep soul in the music of Devon Gilfillian—but for the talented Nashville-based singer-songwriter and bandleader, that descriptor goes way beyond a mere genre classification. Following his electrifying 2016 debut EP with upbeat singles like “High” and “Troublemaker” in 2018, Gilfillian signed to Capitol Records and hit the road––performing with the likes of Anderson East, Keith Urban, Gladys Knight, Kaleo, The Fray, Mavis Staples, and more. In early 2019, Gilfillian traveled to Africa to find healing and inspiration before headlining a tour in Scandinavia and opening for Brothers Osborne on their spring tour. His debut album, Black Hole Rainbow, is available now.

Fitz and The Tantrums
"Sway"