Béla Fleck and The Flecktones: A Harmony Breakdown 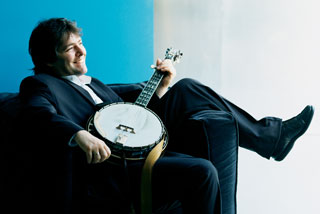 Get the scoop on all of these talented musicians before they hit the Fraze stage this summer!

Béla Fleck started playing banjo at the age of 15 after being awe inspired by the bluegrass playing of Flatt and Scruggs. During his high school years, he started experimenting with playing bebop on the banjo. Before the Flecktones, Fleck made a name for himself in the country-bluegrass world touring with the Blue Grass Revival group in 1982. He also released several solo albums before forming the Flecktones.

The Flecktones made their self-titled debut recording in 1990 by playing a “blu-bop” mix of jazz and bluegrass and soon became a commercially successful, critically-acclaimed and award-winning band. Fleck–the only musician to be nominated for Grammys in jazz, bluegrass, pop, country, spoken word, Christian, composition and world music categories—recently won a Grammy for his album Throw Down Your Heart. This Grammy win makes 14 for the man dubbed as the “premiere banjo player” in the world.

RoyEl (Future Man) is an inventor, scientist, musician, composer, and two-time Grammy Award winning performer with Béla Fleck and the Flecktones. RoyEl has captured audiences with his ground breaking percussion technique performed on his first invention he calls the Drumitar. The guitar shaped Drumitar allows him to replicate sounds of an entire contemporary drum kit with just a few fingers.

His desire to play with the greatest possible emotional sensitivity has led to his new creation, “The RoyEl” – an instrument shaped like a piano upon which he is composing music for the new century. This music employs the power and science of Mother Nature to attain the natural ratios of the Golden Means (Phi) and the keyboard is styled after the table of the periodic elements. It’s no accident, he said, that the RoyEl resembles a keyboard since, “More and more I see the piano like a drum set and the drum set like a piano.”

Jeff Coffin, well-traveled saxophonist, composer, and Grammy Award winning member of Béla Fleck & the Flecktones, rejects all labels and categories other than “music” and “musician.”

Since 1997, Coffin has traveled the world with the Flecktones, performing with musicians of all walks and styles. Along the way, Coffin has absorbed an astounding range of influences. “Whether it be New Orleans Second Line, African music, Indian Ragas, folk songs, Alan Lomax field recordings, jazz, or funk,” he says, “the spirit and breath of the music is what I take away from listening and playing. It’s what decides for me whether I like it or not.”

When not on the road with the Flecktones or his own group, the Mu’tet, Jeff is usually doing clinics or playing in the studios in Nashville, TN. Those with whom Jeff has shared the stage and/or the recording studio include such diverse artists as The Dave Matthews Band, Branford Marsalis, McCoy Tyner, Baaba Maal, Mike Clark’s Prescription Trio, Garth Brooks, Phish, Van Morrison, J.D. Souther, Vinnie Colaiuta, Bob Moses, Konger Ol Ondar, Del McCoury, Stanton Moore, George Porter Jr., John Scofield, Lynyrd Skynyrd, the Wailers and many others.

Victor Wooten redefines the word musician. Regaled as the most influential bassist since Jaco Pastorius, Victor is known for his solo recordings and tours, and as a member of the Grammy-winning supergroup, Béla Fleck & The Flecktones. He is an innovator on the bass guitar, as well as a talented composer, arranger, producer, vocalist and multi-instrumentalist.

Victor is the loving husband and devoted father of four; the youngest sibling of the amazing Wooten brothers (Regi, Roy, Rudy and Joseph), and the bassist in their famed family band; the student in the martial art of Wing Chun and the nature survival skill of Tracking; the teacher of dozens of bass players at his acclaimed annual Bass & Nature camp; and the master magician.

In 1988 Victor moved to Nashville, where he worked with singer Jonell Mosser and met New Grass Revival banjo ace Béla Fleck. A year later, Fleck enlisted Vic, his brother Roy (a.k.a. Future Man) and harmonica-playing keyboardist Howard Levy to perform with him, and the Flecktones were born. After three highly successful albums, Levy departed in 1993, and the band’s new trio format enabled Victor to develop and display a staggering array of fingerboard skills that turned him into a bass hero of Pastorian-proportions and helped earn the band a Grammy.

With the Flecktones in full flight, Victor set his sights on a solo career, first forming Bass Extremes with fellow low-end lord Steve Bailey (leading to an instructional book/CD and two CDs, to date), and finally releasing his critically-acclaimed solo debut, A Show of Hands, in 1996. Today, Victor continues to do solo work, his latest being On Soul Circus, and continues to make music and tour with Béla Fleck and the Flecktones. Victor performs his usual high-wire act on a bevy of basses and shows that he has the rare ability to continuously raise the bar, always growing as an artist.

Béla Fleck & The Flecktones
Together these musicians create a very diverse fanbase. Béla commented on the Flecktones’ “raging eclecticism” in the May 2000, issue of Down Beat saying, “The more diverse the audience there is, the better. If you’ve got people who would normally be jazz fans sitting in the same room with people who love bluegrass, some funk fans who love Victor, some Deadheads, it turns into this roomful of happy people who are all real different.”

Steve Futterman, commenting on the Flecktones’ Left of Cool 1998 album in Entertainment Weekly: “Heavyweight players who make an endearing fusion, the Flecktones have a fine time roaming all over the musical map… it’s hard to resist a band that draws on bluegrass, funk, world music, pop and jazz with such glee and blissful lack of pretension.” Today, Béla Fleck and the Flecktones continue to make music together, and their global appeal makes them hard to resist.