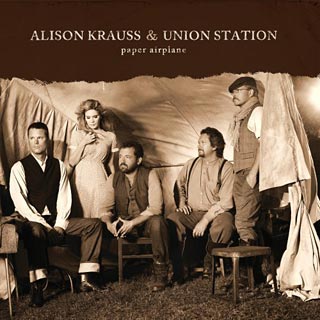 Alison Krauss & Union Station featuring Jerry Douglas will bring their Paper Airplane Summer Tour 2011 to Kettering at Fraze Pavilion on June 10. Tickets will go on sale on Saturday, March 5 at 10 am and will be available at the Fraze Ticket Office, all Ticketmaster locations and Ticketmaster.com.

On April 12th, 2011 Rounder Records will release the eagerly anticipated Alison Krauss and Union Station album, Paper Airplane.  A truly breathtaking collection of 11 exquisite songs, Paper Airplane is Krauss’ 14th album and the band’s follow-up to 2004’s triple Grammy® winning Lonely Runs Both Ways (Rounder). It is Krauss’ first release since her 2007 internationally acclaimed, multi-platinum collaboration with Robert Plant, Raising Sand, which won six Grammys including “Record Of The Year” and “Album Of The Year.”

Part of Alison Krauss’ incontestable talent is how effortlessly she bridges the gap between roots music and country, rock and pop. A highly sought-after collaborator, Krauss has worked with some of the biggest names in popular music, including James Taylor, Phish, Dolly Parton, Yo Yo Ma & Bonnie Raitt. Since signing with Rounder Records at the age of 14 in 1985 Krauss has sold in excess of 12 million albums and garnered 26 Grammy® Awards, the most for any female and the third most of any recording artist in Grammy® history. Her breathtaking live performances should not be missed.