Bad Company: The Swan Song Years will be released on August 2, 2019 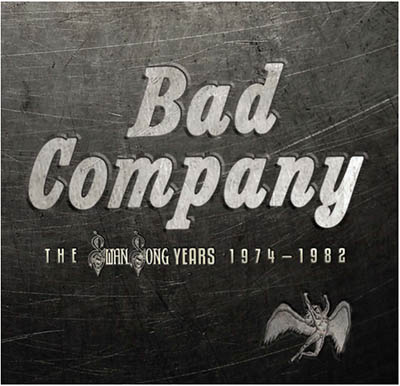 Six-Disc Boxed Set Includes Recently Remastered Versions Of Every Studio Album The Legendary Group Released Between 1974 And 1982, Including Hits Like “Feel Like Makin’ Love,” “Run With The Pack,” “Can’t Get Enough” And “Movin’ On”

Available From Rhino On August 2

LOS ANGELES – Bad Company’s real-life “Rock ‘n’ Roll Fantasy” began 45 years ago when the British quartet topped the album charts in America with their self-titled debut, setting the group on a trajectory to become one of the most-popular bands of the classic-rock era.

Rhino celebrates Bad Company’s multi-platinum musical legacy with a new clamshell boxed set that includes every studio album the group released on the Swan Song record label between 1974 and 1982. THE SWAN SONG YEARS 1974-1982 will be available on August 2 for $39.98.

Each album has been remastered from the original analogue multi-track tapes, including newly remastered versions of Desolation Angels and Rough Diamonds that are making their debut as part of this set. The other albums included in the collection are: Bad Company (1974), Straight Shooter (1975), Run with the Pack (1976), and Burnin’ Sky (1977).

The band’s 1974 debut Bad Company went to #1 in America and was certified 5x platinum on the strength of future-radio staples like “Can’t Get Enough,” “Rock Steady,” and “Movin’ On.” The multi-platinum streak continued a year later with Straight Shooter. Certified 3x platinum the album delivered standouts like “Good Lovin’ Gone Bad,” “Shooting Star” and the Grammy-nominated smash, “Feel Like Makin’ Love.”

The band notched another platinum record in 1976 with Run with the Pack, which includes “Silver, Blue & Gold,” a song that has become a fan-favorite even though its never been released as a single. Burnin’ Sky went gold in 1977 and was followed two years later by the double-platinum Desolation Angels. The end of an era came in 1982 with the release of Rough Diamonds. Certified gold, it was the last album the band recorded for Swan Song and the final studio album the original quartet ever released.

Bad Company will hit the road this summer on tour throughout North America. For tour information and dates, please go here:www.badcompany.com/tour