Catching Up with Brian Culbertson 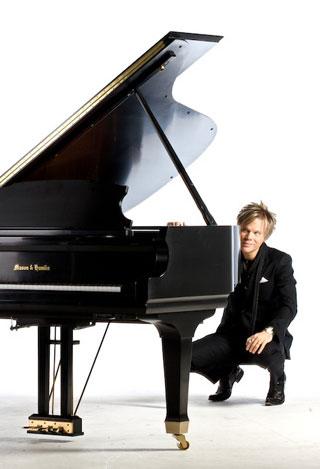 Returning to the Fraze on July 7th is famed jazz artist, Brian Culbertson. In November of 2010, Brittany Frederick of TV Overmind interviewed Culbertson after he was named “Keyboardist of the Year” at the 2010 American Smooth Jazz Awards, she caught up with Brian to ask about not only his phenomenal career as a jazz artist, but also his background in composing for television commercials and his thoughts about music in television.

Brian, you really get around, career-wise. A lot of people don’t know you started in commercials. What were some of the ones you did? How different is that from working on “regular” music?

I actually started doing jingles after I released my second CD and continued doing them during the three records after that balancing jingles, recording and touring. It was a crazy four and a half years! I worked for a guy by the name of Cliff Colnot who I studied composition and arranging with in high school and college. Between 1995-1998, we did most of the music for United Airlines (Gershwin’s Rhapsody in Blue theme), Sears, Gatorade (hip-hop), McDonalds (Hamburgler and Fry Guys), Coors (Pete Coors walking around in the mountains), Marlboro (international), Nintendo, Jewel/Osco and countless others.

Half of what we did was what is called ‘incidental’ music. In other words, background music that is there to support the picture. Other times, we would use existing themes and do new arrangements, like on the United Airlines spots or McDonald’s “Have you had your break today?” We did not write that; we just used it in our new arrangements.

The process was vastly different than writing music for an album. Most spots were either 30 seconds or one minute so you had to fit it all in that time span and also time any ‘hits’ to the picture. So there was a lot of calculation you had to do with changing tempos, et cetera, to make that happen. Many times the picture would change after we had already recorded the music, so we’d have to re-record it because the hits were then off. That was fun…not!

All in all, it was amazing musical training for me as a young musician because everyday we were writing and recording in a different style of music. Everything from full orchestra, to big band swing, to hip-hop rap, to dixieland swing, to classic rock, to you name it. Like I said, it was a roller coaster of a few years, but I don’t regret any of it.

You also have your own radio show. What’s that like? How do you balance that with your music career?

It started when I was asked to be a ‘celebrity DJ’ on the WAVE here in Los Angeles to talk about my Christmas CD when it was released back in 2006. Right after that, the owner of the Smooth Jazz Network heard that broadcast and said he liked how I sounded on the air. He asked me if I wanted to be a weekend morning host on Saturdays and Sundays between 6-10 AM on his new Smooth Jazz Network that would be syndicated to 30 stations around the US.

I jumped at that chance and did that for about two and a half years until I got a call from him saying that Ramsey Lewis was leaving his morning show and they wanted me to replace him. I was very honored to follow in the footsteps of such a legend. I had filled in for Ramsey a few times when he toured in Europe so I guess it felt like the right move to have me take over. It definitely is a tricky balance but its a lot of fun to be able to talk about the music that I know and love each and every morning. That’s what motivates me – if I have fun doing it. I say once that feeling goes away, it’s time to move on. But for not, I’m loving it! Wait, isn’t that the McDonald’s jingle?

Have you ever considered composing music for a television series? Do you have a favorite TV theme?

I would rather do film scores than a TV series because a film is a single piece of art that is finished quickly. I’d rather not be tied to a show that is constant, although I hear the money is ridiculous, so ask me again if you have an offer. My favorite TV theme was from Six Feet Under and it was written by Thomas Newman. I love his work.

Has any of your music ever been utilized in TV or on a soundtrack?

Only a couple songs a few years ago. Most of the time, producers will have the film composer redo an instrumental song to sound like yours if they like [it] if as opposed to licensing your song. It’s much cheaper that way.

You did make the decision to put out your first companion DVD when you released Live From The Inside. Talk about making that. Would you do something like that again?

People had been asking if I was ever going to release a DVD, and finally I came up with this concept that I felt good about, so I went for it. Obviously, it’s very different that a standard ‘live’ performance DVD, which are always shot in a theater or an arena with a live audience. I took a unique approach that goes much deeper into who I am as a person and a musician with all of the documentary vignettes in between each song. Plus the performance is in a studio, so you get the ‘studio quality’ sound which I love. We were also able to get really up close with all of the cameras since we weren’t blocking the audience’s view, because there was no audience. I’m very happy with how it turned out but I probably won’t do another [one] like it. Let’s let it be what it is and we’ll see what happens next time around.

Read More of the Interview