Charlie Wilson “I Am In It To Win It” 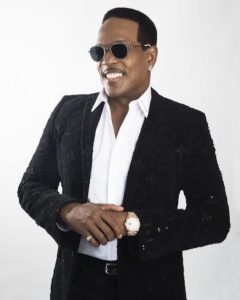 Some people might say that after notching ten No. 1 singles, 13 Grammy Award nominations, a New York Times best-selling memoir and ongoing sold-out, coast-to-coast arena tours, Charlie Wilson has proven his point….and he isn’t planning to slow down anytime soon.

“I’ve been in this game for many years,” reflects the Gap Band founder and solo icon.  “I’ve had some big hit records and sold a lot of records. But I need to still show people that I’m in it. It’s championship time.”

Wilson underscores that declaration with his latest album, In It to Win It (P Music Group/RCA, Feb. 17 2017) which includes a 2019 Grammy nomination for Best Traditional R&B Performance for the track “Made For Love,” his enchanting duet with Lalah Hathaway. In 2018 Charlie was also nominated for three 2018 NAACP Image Awards, Outstanding Male Artist, Outstanding Duo, Group or Collaboration and Outstanding Album.

The set boasts two number one singles which hit two different Billboard charts in April, 2018.  “Chills” was #1 on the Adult R&B Songs chart and “I’m Blessed” ft. T.I. was #1 on the Hot Gospel Songs (and stayed in the top 5 for 65 weeks).  This is the first time an artist has had two different #1 songs on these charts at the same time. “I’m Blessed” was also nominated for a 2018 Billboard Top Gospel song.

“’I’m Blessed’ says exactly where I am in my life, blessed to still be making music that people want to hear,” says Wilson. “2018 has been a tough year for so many people around the world, so I’m proud to release a song to remind us that we can all find some blessings in our lives. And having T.I. bring his flavor, sharing who he is and how his journey is filled with blessings, is an added bonus.”

Wilson continues his reign as “Uncle Charlie,” the lovable nickname originally given to him by Snoop Dogg, by being one of the most highly sought-after adult entertainers for today’s top Hip-Hop and Pop artists. In 2018 he stepped in as a replacement for Cardi B opening for Bruno Mars on his 24K Magic World Tour Finale performing for thousands of fans in Minneapolis, Detroit, Dallas, Los Angeles and Mars’ hometown, Honolulu, which made history selling out three nights at Aloha Stadium. The experience is one Wilson will never forget. “I have been a fan of Bruno’s from day one and it has been an honor to be able to share the stage with him performing to the thousands of fans on his record-breaking tour.  The energy for our show in Hawaii at Aloha Stadium was beyond anything I can recall in my career. In the end I couldn’t be more proud and happy for Bruno and what he has accomplished in the evolution of his music” said Wilson.

He also joined Kanye West and Kid Cudi to sing the chorus on the track “No Mistakes” from West’s album Ye, which debuted at #1 on the Billboard 200 chart. Wilson also united with long-time collaborator and friend, Snoop Dogg, on the track “One More Day” from Snoop’s “Bible of Love” gospel album, which debuted at #1 on the Billboard Gospel Albums chart.

As a tribute to his 23 years of sobriety, helping homeless addicts and educating the African American community about prostate cancer, Wilson was honored at the 2018 NAACP Image Awards with the first ever Music Makes A Difference Award.  “It was truly an overwhelming experience to receive this award,” stated Wilson.  “There are numerous people who have been by my side these last 23 years and the most important person is my wife Mahin.”

In May, 2018, The National Museum of African American Music, scheduled to open in Nashville in 2019, honored Wilson with their Rhapsody & Rhythm  Award at their Legends Celebration.

Coinciding with the release of In It To Win It, Wilson’s national U.S. tour sold out arenas around the country.  He is continuing to tour with dates in the U.S. and a special performance in London at the British Summer Time Festival in Hyde Park with Bruno Mars in July 2018.

Breaking away from the tradition of using his name in the album title, Wilson also recruited an A-Team of guest features for his seventh solo album. Joining T.I. as first-timers in that circle:  Pitbull, Wiz Khalifa, Robin Thicke and Lalah Hathaway. Wilson, who executive produced the 13-track album along with long time manager, Michael Paran, reunited once again with The Cartoons (Emile Ghantous, Steve Daly and Keith Hetrick), Gregg Pagani and Wirlie Morris on the creative side. New to the mix this time around: fellow songwriter/producers J.R. Rotem (Jason Derulo, Gwen Stefani, Empire), Eric Hudson (Kanye West, John Legend) and Rob Knox (Justin Timberlake, Rihanna, T.I.).

“In addition to working with our talented core of producers, one of our goals was to add some new talent to the team,” stated Paran.  “I was excited to bring in J.R. Rotem, Eric Hudson and Rob Knox to the project as they added an adrenaline shot to the recording process and really inspired Charlie to cut all kinds of music.  I can truly say Charlie had a lot of fun recording this album and you can hear that reflected in the music.”

Together, the team crafted a package that fully encompasses Wilson’s unlimited reach. He explores the synergy between pop and R&B with Thicke on the mid-tempo “Smile for Me” (“You can’t tell our vocals apart sometimes,” says Wilson). Then he and Pitbull double-down on the party track “Good Time.” And who knew rapper Wiz Khalifa possesses an impressive singing voice, which he shows off on the noteworthy “Us Trust.” Another “oh wow” moment is the duet between Wilson and Lalah Hathaway on the scintillating 2019 Grammy nominated “Made for Love.” Their what-took-so-long pairing calls to mind the magic conjured between Lalah’s late father/soul legend Donny Hathaway and Roberta Flack.

“She’s definitely got her own spirit, but I could see Donny’s aura as well,” notes Wilson of working with Lalah. “It just makes you feel good inside when you hear her sing. She nailed it.”

Never one to shortchange his fans, Wilson unleashes his powerful tenor on the uplifting title track, the inspirational “Amazing God” and romance songs “Precious Love” and “New Addiction.” To round out In It to Win It, Wilson reunites with “nephew” Snoop Dog for the sexy romp “Gold Rush.”

“Love is a powerful word and as men we need to let our women know that we love and respect them,” stated Wilson.  “So, when guys bring their ladies to my show or have this album playing during a romantic dinner, they know I am speaking for them.”

Before launching his solo career in 2000, Wilson racked up a string of hits in the late ‘70s and ‘80s as front man with the Gap Band. The pioneering R&B/funk group charted such frequently sampled classics as “Outstanding,” “Yearning for Your Love,” “Burn Rubber on Me,” “You Dropped a Bomb on Me” and “Early in the Morning.”

Wilson signed to Jive (now RCA) in 2004 after landing his first No. 1 Billboard Adult R&B hit in 2000, “Without You.” Since then, he’s released six solo albums and become a consistent chart presence. His tally of 19 hits boasts seven more Adult R&B No. 1s. Among them: “My Love Is All I Have,” “You Are” and “There Goes My Baby.” While garnering 13 Grammy nominations and other industry accolades, including BET’s 2013 Lifetime Achievement Award, Wilson has stayed busy on the road, as he is a major concert draw, claiming the crown for top winter tour of 2015 with his Forever Charlie arena tour, or in the studio.

In the years between the Gap Band’s heyday and his solo success, Wilson survived drug and alcohol addiction, homelessness and prostate cancer. He chronicled his odds-defying life and career in his 2015 best-selling autobiography, I Am Charlie Wilson. Sober now for 23 years, the singer says, “I wouldn’t have believed I’d be where I am right now. That’s why I shout every night because I thank God for allowing me to be here.”

“I’m looking forward to continue touring and making new music.  “And, I’m not stopping there, because I Am In It To Win It.”