Bruce Hornsby on the Making of Levitate 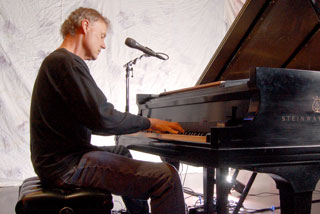 This in-depth bio explores Hornsby’s career, as well as his latest studio album Levitate with the Noisemakers.

“When I play music, I guess I’m what you’d call an ecstatic,” says Bruce Hornsby. “I’m always pursuing those joyful, exuberant, transcendent moments that happen when everything is working. That’s why I called this album Levitate, because that’s what those moments feel like.”

The 13-time Grammy nominee’s multifarious talents and far-ranging musical interests are prominent on Levitate. The album’s 13 songs span an expansive sonic and emotional palette, encompassing heartfelt insights and absurdist humor, while incorporating a broad assortment of influences within compact song structures. The material ranges from the expansive, expressive songcraft of “Prairie Dog Town” and “In the Low Country” to the gently reflective introspection of “Invisible” and “Here We Are Again,” with the album-opening “The Black Rats of London” offering a swaggering treatise on the influence of the rodents, insects and microbes upon key historical events. Such colorful moments help make Levitate a consistently compelling evocation of Hornsby’s established abilities, as well as a substantial creative departure.

“I’ve always been about finding a place to express my interest in playing the piano within the pop song context,” Hornsby explains. “But with this record, I felt like I’d done that enough, so this time I really wanted the focus to be on the songs. This record actually has a couple of songs that are under three minutes, which is kind of unprecedented for me.

“It’s also my first record with no piano solos,” he adds. “I tend to write long, lyric-intensive songs, and I also like to blow. But this time I thought, I’ve done that, and I really want to make this record more about the writing.”

Beyond its distinctive musical approach, Levitate features the vibrant balance of sincerity and silliness that’s long been a hallmark of Hornsby’s songwriting. “As I get older, I tend to gravitate in my writing more and more toward the humorous,” he says. “For years, I was sort of well known for writing love songs, but I stopped doing that a long time ago, because it’s just not what I’m interested in now. But for Levitate, I actually wrote a love song, ‘Here We Are Again’–although it’s a time-travel fantasy love song using the language of physics, it resonated for me as an interesting angle lyrically.”

“This particular lineup has been together since ’02, but J.T. has been with me for nineteen years, Bobby for sixteen, and JV has been here for fifteen, so I’ve got a lot of history with these guys,” Hornsby states. “The players come from disparate backgrounds and all bring something different to the table, but we’re all on the same page in our pursuit of a joyful noise. Playing with these guys consistently pushes me to improve, vocally and pianistically.”

Levitate (which Hornsby co-produced with studio vet Tony Berg) also features guest appearances by Eric Clapton on “Space Is the Place” and fiddler Andy Leftwitch, a longtime mainstay of Ricky Skaggs’ band, on “The Black Rats of London.”

The album is dedicated to the memory of Hornsby’s talented nephew R.S. Hornsby, who frequently performed with Bruce as guest guitarist, and who was killed in a car accident six days after recording a memorable solo on “Continents Drift.”

“That’s been, of course, so difficult for our family,” notes Hornsby. “But I love the fact that this beautiful, long solo that R.S. played can serve as his last testament. He was a beautiful player; he really had the gift. He played with a lot of soul, a lot of feeling.”

Although Levitate marks a departure for Hornsby in many respects, it displays the same creative iconoclasm that’s been a constant in the artist’s two-and-a-half decade recording career. His commercial stock soared early on, when “The Way It Is”–the title track of Bruce Hornsby and the Range’s 1986 debut album–became the most-played song on American radio in 1987, winning ASCAP’s Song of the Year award. “The Way It Is” and such subsequent hits as “Mandolin Rain” and “Every Little Kiss,” established Hornsby as popular pop act, while high-profile work with the likes of Don Henley, and Huey Lewis made him an in-demand collaborator.

Despite his early successes, Hornsby chose to pursue a more personal, idiosyncratic musical path, focusing on projects that sparked his creative interest and musical progress. That direction was manifested in his lengthy association with the Grateful Dead, with whom he’s performed more than 100 concerts as guest keyboardist. His work with the Dead encouraged Hornsby to incorporate his interest in musical improvisation into his own performances, while his eclectic musical interests have been reflected in a wide array of recording projects. Over the years, Hornsby has successfully ventured into jazz, classical, bluegrass and even electronica, as reflected by such acclaimed recent releases as the bluegrass project Ricky Skaggs and Bruce Hornsby and the jazz trio album Camp Meeting, with Jack DeJohnette and Christian McBride. The prestigious list of Hornsby collaborators now includes such diverse figures as Ornette Coleman, Bob Dylan, Bela Fleck, Charlie Haden, Bonnie Raitt, Elton John, Branford Marsalis, Pat Metheny, Robbie Robertson, Leon Russell, Chaka Khan, Wayne Shorter, Squeeze, Tupac Shakur and Sting.

“I guess I’m a bit of a musical proselytizer,” says Hornsby. “I’m always hoping to turn the audience on to more adventurous music and music that’s below the mainstream radar. I know that that may seem too pretentious to the rock and pop world. But for me it’s all just beautiful music, and people seem willing to come along with me on the journey.”

Indeed, Hornsby’s musical adventures have won him an extraordinarily devoted and open-minded fan base, which has enthusiastically supported his varied musical output. “For a good two or three years in the mid-’90s, I hardly played any of my hits on stage, and people thought I was committing career suicide,” he recalls. “But for me, it was about getting people to understand that if you’re here for a stroll down memory lane, then I’m not your guy. And gradually, I was able to sort of flip my crowd, and acquire an audience that’s there to hear us be adventurous.”

Hornsby’s deep grounding in American roots music recently led him to return to his alma mater, the University of Miami, to launch the Creative American Music Program. The new program develops the creative skills of young songwriters by immersing them in the multiple musical traditions–including folk, old-time traditional music, blues, gospel and bluegrass–that are the foundation of modern American songwriting.

Such projects are consistent with the same lifelong pursuit of musical transcendence that helps to animate Levitate. “To me,” says Hornsby, “it’s always just been about broadening my reach and moving into new areas. So it’s a fantastic situation to be able to do that, and to continue to pursue a wide-ranging musical life.”