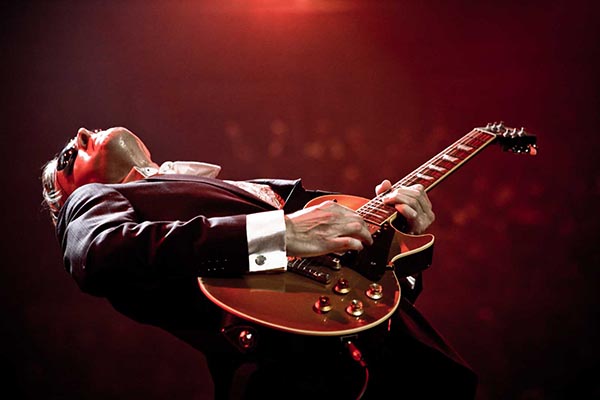 March 8, 2019 – Today, Two-time GRAMMY-nominated blues-rock titan Joe Bonamassa announces tour dates for summer 2019 in support of his all-original studio album Redemption (J&R Adventures), which was released last September. New tour dates will go on sale Friday March 15th and will be available at www.jbonamassa.com/tour-dates. The tour follows an astounding 30+ shows already this year and will be capped off with Joe’s inaugural Keeping the Blues Alive at Sea Mediterranean Cruise (for more information visit bluesaliveatseaeurope.com).

The newly announced dates are set to hit major venues across the East Coast and Midwest in North America. This leg of his tour kicks off on July 22 at Nashville’s trademark staple Ryman Auditorium and ends at the legendary Red Rocks Amphitheatre in Morrison, CO, for a one-of-a-kind celebration, both are venues that Bonamassa has previously sold out! The Red Rocks event will feature two, not just one, performances – a major milestone for the iconic guitar player. This includes two incredible nights of two very different set lists as he celebrates the five-year anniversary of his first-time at Red Rocks; an event that fans and critics alike will not want to miss! Furthermore, on July 30, Bonamassa will perform at the historic Bethel Woods Center, site of the original Woodstock Festival, where he will be a major headliner for their special 50th anniversary celebration. Tickets for the newly announced dates go on sale to the public on March 15th via jbonamassa.com/tour-dates.

Bonamassa is one of today’s top live performers and his enthusiastic shows are one of the biggest parts of his career, and a favorite for music lovers worldwide. Hailed internationally as one of the greatest guitar players of his generation, Bonamassa has almost single-handedly redefined the blues-rock genre and brought it into the mainstream. He’s on the road about 200 days out of the year, and when he’s not on stage, he’s fully committed to crafting the most intricate, diversified new music to share with his dedicated audiences and fans.

In 2018, Bonamassa achieved his 21st #1 album on the Billboard Blues Chart, with Redemption, his most ambitious, barrier-breaking studio album yet. With over 30 albums to his credit, including studio and live recordings, collaborative albums with blues sensation Beth Hart, and side projects Black Country Communion and Rock Candy Funk Party, the guitar sensation somehow always finds ways to reinvent his artistry.

Earlier this year, Bonamassa also became the host of a new weekly show on SiriusXM’s Bluesville. The show, Different Shades of Blue with Joe Bonamassa, explores all aspects of the blues music genre like never before and has Bonamassa curating his favorite blues songs with an eclectic mix of everything from legendary classics to historical deep cuts and modern hits, airing 6pm ET every Monday on SiriusXM channel 74.

A prolific writer who is always on the hunt to expand his eclectic musical horizons and develop new ways to interact with fans, Bonamassa has a limitless work ethic whether it’s in studio, on the road, or working with other artists to spur new music. This year on the road, audiences see Bonamassa at his ultimate creative peak as an artist, and with these new tour additions his fire is unstoppable. With a vast, unparalleled catalogue of music under his belt, this tour promises to be Bonamassa’s best.