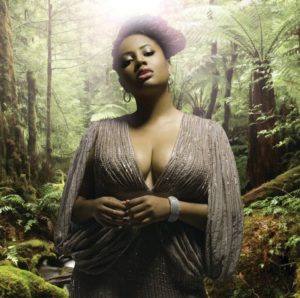 See her at Fraze Pavilion on July 20, 2019 as special guest of Charlie Wilson. TICKETS AVAILABLE at http://fraze.com/charlie-wilson/

Ask her to describe her voice and she might say it feels like, sounds like, soul. But when it comes to defining the essence of music, itself, Lalah Hathaway can go on and on…

“Music is so textured and layered,” she says, “and it is an absolute entity in my life. It’s three-dimensional, it’s tangible, and when I die, I’ll say goodbye to it, just as I will to everyone standing around my bed.”

In the four years since she’s blessed the people with a set of songs, she’s been “working, writing music and living a very, simple life. Many people think that you’re just lounging between albums, but that time for me was about trying to find a place to land that will give you the opportunity to create something artful, something mindful,” Lalah notes.

With SELF PORTRAIT, (Stax Records/Concord Music Group), her fifth studio album, including the Joe Sample duet, and on which she co-wrote and co-produced, Hathaway is poised to express who she is, where she is, today, at this very moment. For starters, she is an artist, of course, but she’s also a devoted daughter, culture junkie and a good friend, even. But not necessarily in that order.

“This album is like a movie of my life over the last couple of years,” she says. “The portrait I see of myself is of a very confident, smart woman who is extremely funny, independently wealthy and well-traveled – all things that I am to a small degree., she laughs. “Every day, I realize that I’m walking toward the woman I’m going to be. She’s there. I can see her. ”

Leading the 12-song collection is “Let Go,” a dance-oriented, up-tempo number she produced with Rex Rideout and wrote alongside Rahsaan Patterson. And just as the title suggests, the song is about acknowledging and releasing whatever’s not working to make room for the next experience. “I’ve had to let go of quite a few things, quite a few situations and a couple of mindsets,” she admits about the origins of her first single. “Every so often, I have to remind myself to just let some stuff go – from people and relationships to an old pair of jeans.”

While it might seem that “On Your Own,” which re-teams her with Rideout and Patterson, is inspired by a past heartbreak, in fact, the idea for the song came to her in a dream. “My father was singing to me and telling me that I could make it on my own,” she reflects. Keeping in step with the theme of family, she journeys back to her childhood with “Little Girl,” which she co-produced with Rideout and penned with Patterson and Sandra St. Victor. When she reminisces about growing up under the watchful eye of her mother, she’s always felt the presence of her father in her life.

On “That Was Then,” which she produced with Rideout and written with St. Victor, Hathaway recalls her former self and how much she didn’t know way back then. “I called Sandra in Amsterdam on a Tuesday and said, ‘I don’t know what to write,'” she says. “She was there, helping me craft the melody, by Friday. She’s a baaad girl.” Closing out the album is the Hathaway-produced, “Tragic Inevitability,” a song that stands out for her because of its fluidity. “My friend told me that she got some love while listening to this song, which horrified me and made me happy at the same time,” she remembers. “The track was sent to me by two cats from Amsterdam, Wiboud Burkens and Manuel Hugas, whom I met with Sandra. I just wrote the words that came to me.” As she sings about the things that will no longer be, you might actually feel soothed because, after all, the only constant is change. Life is funny that way.

Born to Donny Hathaway, one of the most influential soul artists of the eighties, and Eulaulah Hathaway, an accomplished musician in her own right, the Chicago native first put pen to paper, “with the music,” as a 10th grader. Later, as a student at Berklee College of Music, she recorded her self-titled debut in 1990, which spawned the hits “Baby Don’t Cry,” “Heaven Only Knows” and “I’m Coming Back.” She returned four years later with A Moment, followed by the much-lauded The Song Lives On, her duet album with Joe Sample in 1999, the same year she began growing her now-signature, cinnamon-hued ‘locs. By 2004, she’d deliver her fourth album, Outrun the Sky, garnering Hathaway her first number one single, the Rex Rideout-produced cover of Luther Vandross’ Forever, For Always, For Love, which was also featured on the critically-acclaimed Vandross tribute album of the same name.

Although she has created a space for herself, it’s not surprising that Hathaway remains connected to her late, great father and his classic sound. “I am his daughter,” she says, softly, “and that’s the truth of who I am, every day. When I was 15, and then, 20, I didn’t get why people were asking me how I felt about him and his music. But when I turned 25, I began to understand. Like my father, I want to leave a legacy of music that makes people really feel something, whether it be happiness, sadness, grief or heartache. I also want them to appreciate my humor which I know can be difficult to interpret in a song.”

In the meantime and between album projects, Hathaway – who’s recorded collaborations with Marcus Miller, Meshell Ndegéocello and Mary J. Blige, among them – keeps her creativity nourished by taking to the global stage and contributing her voice to Daughters of Soul, a musical mélange founded by comrade, Sandra St. Victor, and featuring Nona Hendryx, Joyce Kennedy as well as Indira and Simone, daughters of Chaka Khan and Nina Simone, respectively.

So, how does she hope her latest offering will be received?

“I don’t necessarily need to fit into what’s happening now,” she says of today’s marketplace, “but I want to stand with it, on my own thing. I would really love it if people need the record. I put a lot of myself into this album, so I hope people can hear me and understand who I am.”