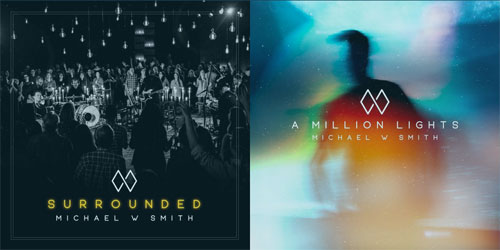 Together, the new albums have become Michael’s 30th and 31st Top 10 on Billboard’s Top Christian Albums chart, more than any other solo artist in history.

Released Feb. 16, Michael’s USA Today, Billboard, Yahoo! Music and NewReleaseToday-acclaimed studio album, A Million Lights, debuted at No. 1 on the SoundScan Christian retail chart while holding the No. 1 position most of release week on iTunes and Amazon.com’s Christian music charts. The recording includes the lead single/video and title track along with “Love Always Wins,” “Crashing Waves,” “Revolution” and “Footsteps,” which was recently added to Spotify’s “Top Christian” and “New Music Friday Christian” playlists. Apple Music also featured the album in their “The Hottest New Music” newsletter.

One week following A Million Lights, Michael’s highly anticipated, live worship album Surrounded released (Feb. 23) amidst 5-star acclaim and became Amazon.com’s No. 1 “Hot New Release.” The recording features the declarative “Surrounded (Fight My Battles),” “Light To You” and “Build My Life,” which Michael also released as a video Feb. 23 on his Facebook and YouTube sites. Parade says the album highlights Michael’s “masterful blend of uplifting messaging, brilliant song writing, solid musical talent and a desire to instill faith and hope into his listeners.”

The new albums were further highlighted in an hour-long “Praise” feature on TBN that can be viewed now at TBN.org, while CBN’s “The 700 Club” featured Michael and his new projects Feb. 22.

In addition to the new music, Michael received the distinct honor to lead “Just As I Am” Feb. 28 during the memorial service in the Capitol Rotunda honoring the late Rev. Billy Graham and “Above All” during the service held March 2 in front of the Billy Graham Library in Charlotte, NC.

Sharing a musical tribute to Rev. Graham, along with the new music and fan favorites from his extensive repertoire on the road, Michael’s full-production, “Surrounded By A Million Lights World Tour” launched in Rochester, MN on March 8. Michael also works into his schedule his 10-day “Israel Tour 2018” beginning April 10. For all his latest tour detail, go to http://michaelwsmith.com/tour/.