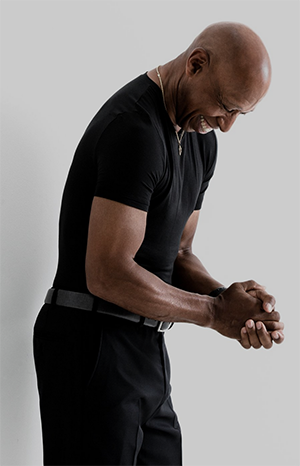 When people think of Jeffrey Osborne, they probably immediately think of “On the Wings of Love,” which was a monster hit in 1982. Or maybe they think of his years with LTD, which placed three songs in the Top 40 (12 in the R & B top 40, including 3 at Number One). Or just maybe they think of the incredible concerts that he’s been doing for decades.

Now, Osborne will bring his electrifying show to Thornton Winery on Saturday night as part of the 2018 Champagne Jazz Concert Series. At the same time, he’s bringing a new album, “Worth it All,” one that has been in the works for more than 13 years.

“It gets harder for us to find companies that want to issue your records,” he said. “I spent the last 13 years working on original stuff. I was going to record a classic jazz album, so I sat down to write and as I worked on it, it got more R & B and more old school. I went to the label and said, ‘I am feeling it more old school R &B and not jazz’ and they said, ‘Do it.”

And he sees the styles of music intertwined anyway.

“In truth, smooth jazz is R & B anyway,” he said. “That’s why they approved the direction of the album.”

As with many artists, his childhood laid a foundation for his love of music.

“Oh, I was hearing jazz from my family,” he said. “I’m the youngest of 12 so I was hearing it, and then I was the last in line into the Motown era. I got a chance to hear real music.”

His father was in the business as well.

“My dad was a musician, so I got to hear a lot of classic singers like Sarah Vaughan, Wes Montgomery and Duke Ellington,” he said.

He also got a chance to sing it pretty early on, singing songs by Curtis Mayfield, The Impressions and doo wop on the street corner. He opened for groups like The Coasters and The Drifters and saw that the singer is more than just the vocals.

“Listen to real singers and you will find that the singer is a fourth instrument,” he said. “That’s what I heard and that’s how I am now with music. Listen to guys like Little Willie John, Sam Cooke and Marvin Gaye. You can hear it.”

When it comes to his own songs, songwriting is a collection of thoughts.

“I think a writer is influenced by everything,” he said. “I know I am by what I’ve heard before or what I’ve recorded before. It starts with the writing. I may think, ‘This sounds too much like an earlier song.’ I want it to have that familiar sound, but I don’t want to just copy it.”

Then again, he feels his listeners will make they own connections.

“People hear a song and say that it reminds them of something,” he said. “I want a song to grasp and take the listener to some place.”

He is a big fan of strings and horns, something that he has learned to use during production.

“As I am recording, I hear orchestration,” he said. “I’ll start with drums and then keyboard and melody. I realize I should layer this and add a string line. You hear it.”

Part of his success he attributes to others.

“Being around people like George Duke was incredible,” he said. “Even when I was with LTD I had horns in the group. Strings and horns reinforces the sound.  It falls in lune with the simplicity of the music. A key is not to overdo it as a producer.”

Naturally with a new album, and a huge collection of solo work, LTD songs and other great standards in the jazz and R & B world, getting a show together and picking songs can be tricky.

“It’s hard to decide,” he said. “I try to see the audience and determine what to do from that. I have new songs of course, but I do think the worst thing to do is to go out and do 9 songs from a new record and leave out so much that fans are dying to hear. Of course, the record company wants you to do the whole album!”

And the stage is some place that is right where Osborne has always liked to be.

“I owe it to my mom because when I was three years old, she used to have me sing for her friends,” he said. “I’ve never been shy and never gotten butterflies.”

When he is on stage, all that matters to him is the audience.

“I want to be able to touch people,” he said. “It’s beautiful to go out and get entertained and hear their personalities. That’s what I want to bring to my fans and the people who come and see me.”