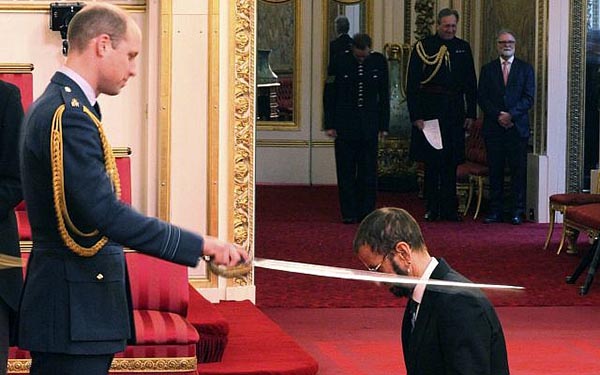 Beatles drummer Ringo Starr was knighted by Prince William on Tuesday, March 20th — and the former Beatle joked that he would wear the insignia “at breakfast.”

After receiving the honor from William — who stood in for his grandmother, 91-year-old Queen Elizabeth, in handing out awards at Buckingham Palace — Starr, 77, told reporters of the new title, “It’s new, and I don’t know how you use it properly.”

He turned to one BBC reporter and quipped, “But I expect you to use it.”

Starr, whose real name is Richard Starkey, was rewarded for his services to music after a career of more than 50 years, most notably changing pop music around the world alongside fellow Beatles Paul McCartney, John Lennon and George Harrison. He admitted to feeling “a bit shaky today on my own” at the palace ceremony without his bandmates.

Starr and his wife, actress Barbara Bach accompanied him, posed happily outside the palace — with Ringo giving his signature peace sign salute.

Starr was awarded the knighthood in the New Year’s honors list released by the palace in December.

“It’s an honor and a pleasure to be considered and acknowledged for my music and my charity work, both of which I love,” he said at the time. “Peace and love. Ringo.”

His bandmate and friend Sir Paul received the award in 1997. They are two of many musical knights —including Elton John, Rod Stewart and Mick Jagger, all of whom can use “Sir” as their title.