Tell Us Your Fraze Story 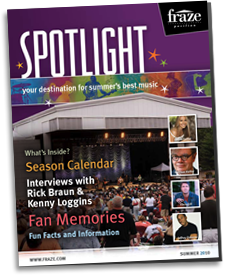 We need you to tell us your Fraze story. Music brings people together and for 20 years, it’s the reason why we are able to bring you the best in summer music each year. You’ve been a devoted audience and devoted fans. For our 20th season Spotlight Magazine, we want to invite you to share your stories with us. Whether you recall a favorite concert, time spent with family and friends at the Fraze, or more, reminisce with us!

Send your memories to [email protected]. Your story is our story, and we want to celebrate it! Please note, due to magazine space restrictions we may not be able to include every story; however, we will try to include as many as possible. Thanks again. We hope you will help us celebrate our 20th season this summer!

Not sure what to write? Below are a few examples from fans that appeared in last year’s issue.

I kept hearing people say, “You should go see this guy up at the Fraze. He’s going to be really big some day.” Tickets were only $12.50 so we thought, “What do we have to lose?” Well, that guy really DID become a big name in entertainment – Michael Buble. And what a great show it was!

My daughter and I attended the Chris Isaak concert a couple of years ago. She was just back from a year in Iraq. Chris had performed for the troops in Iraq, and my daughter had attended. After the show Chris and his band stayed after to sign autographs. My daughter got to shake hands with Chris and thank him for going to Iraq. Chris insisted to my daughter that she is the one who should be thanked for serving our country. That meant a lot to my daughter and I, and we will always remember that night.

Several years ago I was running late to the show by my favorite performer, Brian Culbertson. I zoomed up the street & parked by Fairmont High School. Got out, darn, I forgot my blanket! Oh well, I went to sit down in a single good spot down front (on the lawn) and the concert started.

It was very uncomfortable sitting on that cold ground! The two couples behind me saw that I didn’t have anything to rest on and decided they’d help out. One of them got me a fold-back chair. We chatted together and later, near the ending of the concert when people were on their feet swaying to the last of the music, they grabbed me, put arms around my neck and had me join their group. It was a great feeling that they would treat someone they had just met so well!