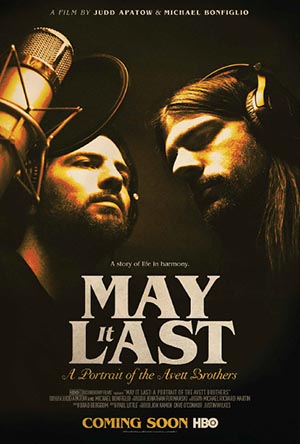 (NEW YORK, NY February 1, 2018) — Days after the HBO debut of the critically acclaimed documentary May It Last: A Portrait of The Avett Brothers, the Grammy nominated album True Sadness [American Recordings/Republic Records] – has launched to #3 on the iTunes Album Chart and #1 on the Rock Albums chart. Check out True Sadness here and May It Last documentary trailer here.

The album sits ahead of some of the Grammy’s recent performers and nominees from this past Sunday’s awards. Since Monday five of The Avett Brothers albums have jumped back onto the iTunes Overall Top 200 Albums Chart including I And Love And You, The Carpenter, Magpie and the Dandelion, Live, Volume 3, and True Sadness.

Co-directed by Judd Apatow [Doc & Darryl, Knocked Up, The 40-Year-Old Virgin] and Michael Bonfiglio [My Next Guest Needs No Introduction with David Letterman, Jerry Before Seinfeld], May It Last: A Portrait of The Avett Brothers made its debut to widespread tastemaker applause. USA Today called it, “A lasting portrait,” while NPR wrote, “It’s a fine film, both as a music documentary and as a family story.” The film debuted on Monday, January 29th on HBO and is available on HBO NOW, HBO GO, HBO On Demand and affiliate portals.

Last week, the band and co-director Apatow could be seen everywhere together. Apatow introduced the group on NBC’s The Tonight Show Starring Jimmy Fallon as they took the stage for “No Hard Feelings” -watch the performance here. They hit NBC’s Megyn Kelly Today for a joint interview before the band delivered a powerful performance of “I Wish I Was”- watch the performance here and the interview here. In addition, the band, Apatow and Michael Bonfiglio appeared on SiriusXM’s Town Hall Studio and were interviewed by Kurt Loder for an inside look at the film – watch the interview here.

Be on the lookout for more news on The Avett Brothers.

In addition, the Rick Rubin produced album, True Sadness continues to garner overwhelming critical acclaim with many considering it their finest release yet. Rolling Stone extolled it as “Their most heart-baring LP,” while Paste dubbed it, “Their most surprising album.” People claimed, “The sincerity of the lyrics keeps the boys true to their roots,” and Interview wrote, “As a whole, True Sadness is the band’s most intimate and exploratory album to date.” The Current summed up its impact asserting, “THE AVETT BROTHERS have emerged as the key act redefining the genre.”