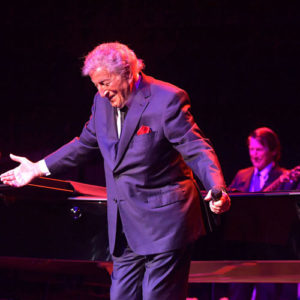 Tony Bennett still performs to cheering mobs all over the world. Glorious reviews follow each concert, “pure joy, ”intimate,” “rollicking,” “tour down memory lane,” ”romance at its most compelling,” ”sparkling.”

Backed by his superb quartet of musicians, he has sung in palaces, The White House, inaugurals and convocations of every sort. He has protested at Selma, thrown opening pitches at ball parks , opened bridges, swung at Carnegie Hall, political conventions. Every celebrity has hugged him. He hates bigotry, inequality, injustice, lobbied against drug use worldwide.

His work ethic is legendary having given a hundred concerts a year at one point. His records have sold tens of millions of copies, won every conceivable plaudit.

Tony has been singing for 80 years starting when he was 10. Antonio Dominick Benedetto was born to an immigrant family in Queens, August 3, 1906. He was drafted into the army and fought in the front lines of the Second World War in Germany, leading to his conversion to pacifism.

His vocal career began as a singing waiter then into nightclubs, stage, radio, TV, and movies. He moved easily within the top echelon of the entertainment world. His career has transcended the fashion rushes of the Beatles and rock and rap. Bing, and Frank, and Perry and the rest have passed on. Tony endures.

His music has fulfilled his destiny as perhaps the world’s greatest ballad singer, ever. He has won every conceivable music award with great distinction.

Don’t miss his rendition of “I left my heart in San Francisco” as its nearly religious in its overtones. The audience are always on their feet in rapturous applause, a huge collective hug.