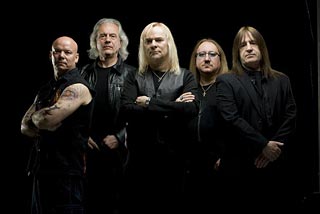 Sometimes jokingly referred to as “The Beach Boys of heavy metal,” Uriah Heep have made a name for themselves in the world of hard rock. They are known for their melodic songs, and trademark multi-part harmony backing vocals, although their music draws on diverse influences including progressive rock, hard rock, heavy metal, jazz, and even country on occasion. Lyrically, they are known for the mythical characters, such as wizards and demons, who create a world of fantasy within the melody of their music. Fantasy graphic artist Roger Dean painted several of their album covers, most notably Demons and Wizards (1972), The Magician’s Birthday (1972), and Sea of Light (1994). Uriah Heep has sold over 30 million albums worldwide.

After gaining huge popularity in Britain and continental Europe, Uriah Heep were finally able to break into the American market with three hit songs, “Easy Livin’,” “Sweet Lorraine,” and “Stealin’.” The band released several commercially successful albums in the 1970s, including the seminal Uriah Heep Live (1973), but their audience declined by the 1980s.

Today, they retain a cult following in the US and UK. Uriah Heep maintain a significant following in Germany, the Netherlands, the Scandinavian Peninsula, the Balkan Peninsula, Japan and Russia, where they still perform at stadium-sized venues. Though only one original band member remains in the group, the current line-up has been touring together for over 20 years.

In 2008, Uriah Heep issued their first studio album in almost ten years – and 21st studio album overall – titled Wake the Sleeper. The album received rave reviews, as it was selected as “Album of the Month” by Classic Rock Magazine (in their June issue), where it earned an 8/10 rating, and was called, “A momentous return to form.” In an interview with Greg Prato of Guitar Site, founding guitarist Mick Box took the time to discuss how the album came about.

How do you compare Uriah Heep ’08 to earlier versions of the group?

Ah that is a tough one. I would say though that this line-up has the same chemistry as the classic early version of the 70’s line-up. I feel the ’08 version has the same creative output and passion for our music that we had back then. Good melodic rock songs and a strong lyric has always been important to us.

How did ‘Wake the Sleeper‘ come about?

Well it has been a long time between studio albums. We have a saying here in England that is “Wake a Sleeping Giant,” and we thought that pretty much summed us up in the new album stakes after a 10 year hiatus. We shortened that to ‘Wake the Sleeper,’ and that became the title. Also, the cover by Loannis fits perfectly with the female Buddha awakening from her meditative state with the glow of enlightenment in her hand. The first track on the CD comes in with immense power, passion, and energy, and sets the tone for the rest of the CD. Apart from the chant of ‘Wake the Sleeper,’ it is all pretty much instrumental.

How about some stand out memories of the ‘Wake the Sleeper’ sessions?

Stand out memories of us all being in the same room recording the backing tracks as a band. We did not want to do this piecemeal – whereby the drummer gets his parts and you slowly build up the track, by adding each instrument as you go along. We wanted to play as a band on one pulse, and this captured the band in full flight. It was great as you had to be on top of your game because if you made a mistake, then you had to do the whole thing again – as the mistake could be heard on every microphone so there was no safety net. We chose a track and rehearsed it to the point where we were all happy with it. Pushed the record button, and between 1-3 takes we had it in the bag. Boy, it was loud in that room though. This was Mike Paxman the producer’s idea, as he heard us in rehearsal and said that’s the power he wanted on the CD. Mike did not sit in the control room like the usual producers do, he was in the room with us in the heart of it soaking up the vibe.

What are some favorite songs from the album?

That is a hard one! “Tears of the World” and “What Kind of God” at the moment. I am a Gemini, and that could all change in 30 seconds from now!

In 2009, Uriah Heep released Celebration: 40 Years of Rock, which is a compilation of their greatest hits. Today, Uriah Heep continues to tour around the globe. Be sure to catch them at their first visit to Fraze this summer!