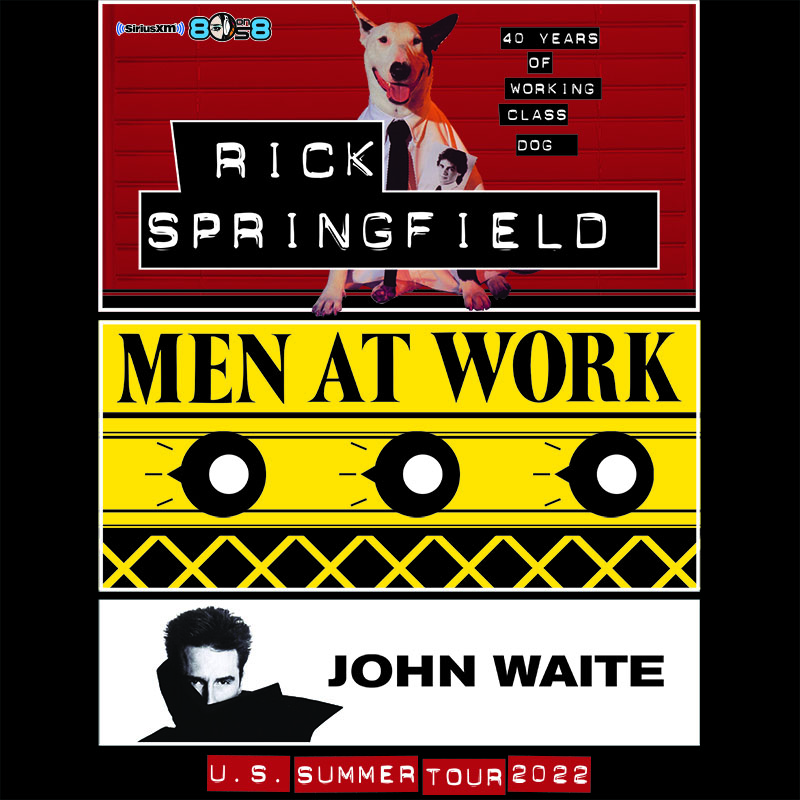 Men At Work
"Down Under"

It’s the 23rd Annual MIX 107.7 SummerFest at Fraze Pavilion. Get ready to celebrate with Rick Springfield, Men at Work, and John Waite!

In the early 1980s, Rick Springfield signed to RCA Records and was then cast as “Dr. Noah Drake” on the soap General Hospital. While he had released six albums in the 1970s, his 1980 break-through album Working Class Dog gave him the #1 single “Jessie’s Girl.” From his music and TV exposure, he became a teen idol. He continued to star on “GH” while touring and releasing Success Hasn’t Spoiled Me Yet, with the hit “Don’t Talk To Strangers.” Upon releasing his 3rd album with RCA, Living In Oz, he quit “GH” and went back to his rock roots. Living In Oz is considered by many his finest (and hardest rock) album. He starred in the movie Hard to Hold in 1984 and released the soundtrack to it with the hit “Love Somebody,” followed by “Don’t Walk Away” and “Bop Til Ya Drop.” His next album, Tao, was followed up in 1988 by Rock Of Life.

Men At Work were formed in Melbourne, Australia in the middle of 1979. The band went on to become a globally successful Grammy winning, multi-platinum selling act, during the early 80’s. The original band however came apart relatively quickly and had disintegrated by 1985.

Colin Hay and Greg Ham responded to demand and toured many parts of the world as Men At Work from 1996 into the 2000’s. Sadly, Greg Ham passed away in 2012.

Founding member Colin Hay has developed a solo career over the last 35 years, writing, recording, and touring extensively throughout the world as a solo artist. He is presently part of Ringo Starr’s All Starr Band. Since 2019, he has also toured and played under the Men At Work banner with his LA based group of musicians, where he plays an exclusively Men At Work set, including all the hits and dearly loved songs which clearly have stood the test of time.

Countless musicians of far lesser accomplishment have probably made similar statements regarding their own personal creative process, but when the confession comes from John Waite – whose been successfully writing, recording and performing some of the most listenable, enduring and appreciated popular music for more than 35 years – one cannot help but both recognize and marvel at the shimmering legacy of this British born rock star.

The ride began when Waite was tapped as bassist and lead vocalist for the Babys who rocketed to Top 20 chart positions with a pair of infections hits, “Isn’t it Time” from the band’s sophomore LP, Broken Heart in 1977 and the monster ballad, “Every Time I Think of You” off 1978’s Head First. But it was the album’s rhythmically aggressive and seductive title track where fans got their first glimpse of the authentic John Waite, a no-holds-barred rock n’ roll performer devoted heart and soul to live performance and making sure every fan in the audience left the concert hall just as elated and exhausted as the band they’d paid to see.

Men At Work
"Down Under"