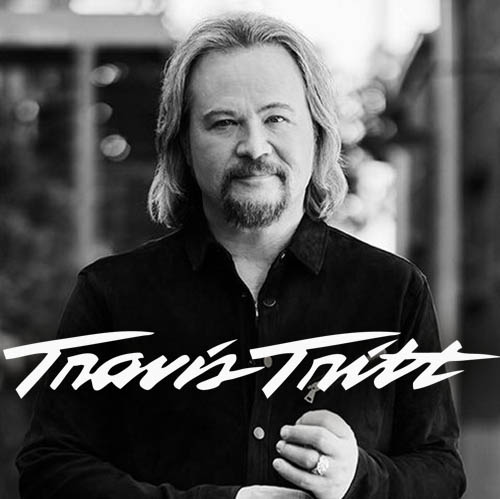 Travis Tritt
"Smoke in a Bar"

Travis Tritt is coming off his most recent album release, Set In Stone; his first original full-length studio album in more than a decade. Released through Big Noise Music Group and produced by Dave Cobb (Chris Stapleton, The Highwomen, Sturgill Simpson), the album features 11 new songs, 8 of which were co-written by Tritt.

Travis Tritt’s albums, seven of which are certified platinum or higher, have led him to amass more than 30 million in career album sales, two GRAMMY® Awards, four CMA Awards, including the CMA Horizon Award (now known as the New Artist Award); a Billboard Music Award for Top New Artist, an invitation to become a member of the world-famous Grand Ole Opry and a devoted fan base that has filled venues coast-to-coast. He is also dubbed one of “The Class of ‘89,” which includes Country music superstars Garth Brooks, Clint Black, and Alan Jackson, who dominated the charts in the ‘90s.

Among his eleven studio albums and numerous charted singles are five number ones and 20 Top 10 hits, including “Help Me Hold On,” “Anymore,” “Can I Trust You with My Heart,” “Foolish Pride,” “Best of Intentions,” “I’m Gonna Be Somebody,” “Modern Day Bonnie and Clyde,” “Here’s A Quarter,” “It’s A Great Day To Be Alive,” and more.

Talent, hard work and a certain unity of spirit are the key ingredients that make a band successful. The Desert City Ramblers possess exactly that–the shared creative vision that encompasses so much more than lyrics and chords. The sound of The Desert City Ramblers combines a gritty southern rock edge and blistering musicianship with the kind of compelling storytelling that is the foundation of old school country music.

Travis Tritt
"Smoke in a Bar"